The mechanical joining procedure using flanges implies the evaluation of many variables that must be considered in order to obtain areliable joint over time.

Forthis reason, this procedure is considered a "special process" from a technical point of view.

The designer responsible for carrying out the work must be able to understand and evaluate the forces that oppose the creation of the joint and, consequently, the forces involved in the production of the hydraulic seal.

The joining process must be described in a tighteneen procedure, evaluated and approved by the project manager and must be given to staff, in turn specifically trained for tighteneen operations.

Below are some suggestions which can be considered as generai rules to follow for the production of reliable flanged joints.

NOTE: for an exact calculation of the screws tightening forces, the designer should know all the technical data of the gasket (such as thickness, specific weight, hardness, compression yeld load, elongation, etc.). 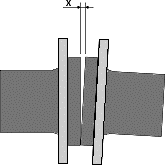